St. Barts is a tiny volcanic island encircled on all sides by shallow reefs with a population of only 10,000 people as of the last census. Due to its poor soil and water sources, the island was uninhabited for many years with the Arawaks and Tainos only visiting periodically however by the 17th century the French settled in on the island with initial settlers numbering around 60.

By the year 1960, the island began to look into tourism as a source of income since it had such few economic prospects. Tourism is now of the major exports of the island especially during the winter season thanks to its warm Caribbean weather, stunning beaches, and captivating landscapes.  It is often touted as a high-end luxury holiday destination however for those willing to look hard enough, you'll find that there is a little something for everyone and the island is actually quite accessible for people from every class.

Why should people visit during the winter?

St. Barts is the perfect Caribbean island for ultimate relaxation and appreciation of an expansive shoreline. Snowbirds who want to spend their winter away from the partying crowds and would prefer to explore the island at a leisurely pace would feel most welcome here. The beaches and entire landscapes are incredibly lush and the warm turquoise water is perfect for swimming. The winter months here in St.Barts are sunny and warm with none of the cold associated with winters back home and there are lots of natural and man-made attractions to see. Your days will be filled with new adventures and you will be surrounded by people that are warm, friendly, and welcoming. Despite being hit by hurricane Irma in 2017, the island has quickly picked itself back up and has opened its doors to tourists from all over the world once again.

The "Lent" which is another name for the dry/winter seasons runs from December to April in St.Barts and is characterized by cooler weather from the usually hot and tropical climate the island has. From May to November, the weather is referred to as the "Wintering" where it is hotter and much more humid than it is during the Lent. The wintering is prone to thunderstorms in the afternoon and the weather takes on a sultry feel with more than a few hours of sunshine. From January to March, the average temperature is around 23°C (73°F) which is perfect for exploring the island or swimming in the ocean. The winter period normally does not see hurricanes (the hurricane season is from June to November).

St. Barts ranks among the safest places in the world for both tourists and residents. Be mindful that you must take precautions as with any other place with human interaction, there can be cases of petty theft which is usually not violent or come with any threat to your safety. There are no gang activities on the island and snowbirds can rest easy knowing they are not in too much danger. You are still advised to watch over your property as you would anywhere else and take the same measures you would in other tourist destinations. Snowbirds May walk about freely at night as there are hardly any "no go areas" without worrying about getting mugged or attacked. Doors are often left unlocked and it is not considered unsafe to give hitchhikers a ride.

The official language of St. Barts is French. Everyone on the island speaks a variety of French and snowbirds who have some knowledge of small everyday phrases and greetings should not hesitate to use them as the locals greatly appreciate being spoken to in their language. A few people speak English especially in the capital of Gustavia and around the resort and tourist areas so you may find a few English speakers on the island. Signs, maps, and menus are also generally in French although you may find a few English translations. The locals also speak their version of creole called the St.Barts creole as well as the St. Barts Patois and Saline French. To get a local SIM card while in St.Barts, you will need to show the mobile network carrier your passport as a means of identification before it will be sold to you and registered. Network coverage is pretty good in most areas and public spaces tend to have free wifi. There are 6 mobile network providers and SIM cards cost around $18 (approx. €14, £12, $22 CAD, $23 AUD).

Things to see in St. Barts

Activities in St. Barts during winter

St. Barts is one of the best places for shopping in the Caribbean. There are a number of chic stores where you can buy designer items as well as locally made unique bohemian items. There are things like jewelry, decorative eggs, and more. There are also concept stores, art galleries, and boutiques where snowbirds can spend long hours shopping to their fill. Restaurants are also open with many located close to the shopping districts so after long hours shopping, you can take a break at any of the exquisite restaurants for a meal. A lot of the local cuisine is centered around seafood. Be sure to try the most popular dish called "Accras" a deep-fried codfish fritter.

St. Barts doesn't have its own airport so most flights land on the Dutch side of the neighboring island of St. Martin and then you can take a 15-minute helicopter ride to St.Barts. Alternatively, you can take a 45-minute ferry ride to the island as well.

The roads in St. Barts are a bit narrower than most, however, getting around by car is the most popular way of getting around the island. Scooters and motorcycles are also available for lease and you can rent a car from any of the rental services on the island. You can rent an economy car for $21 (approx. €17, £15, $26 CAD, $26 AUD) per day.

Tour buses are available as well as taxis but you can also walk to a lot of the attractions in each town as the island is quite small.

There are good clinics in St. Barts with well trained medical staff who are capable of handling minor ailments and injuries who speak basic English. In more serious cases you may need to be airlifted to Puerto Rico or St. Martin. You can also get medication for things like headaches, allergies, asthma, diarrhea, acid reflux, and other pains over the counter easily from any of the pharmacies on the island.

Finding affordable accommodation may be a bit of a challenge as the island is most known for its luxury villas. A decent-sized apartment with basic amenities will cost you around $970 (approx. €806, £695, $1226 CAD, $1245 AUD) for a month. 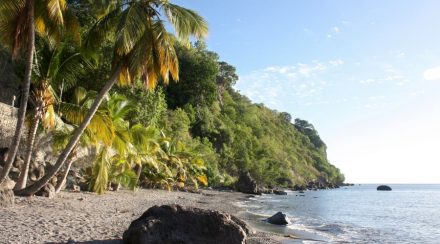